Denny Hamlin won the Toyota 500 and celebrated with a terrifying, smiling mask of his own face

Denny Hamlin had a smile on his face after winning the Toyota 500 at Darlington Raceway on Wednesday night (which included Chase Elliott flipping the bird at Kyle Busch).

That grin, however, was plastered on the mask he wore after he pulled up to do a post-race interview. That’s right, Denny Hamlin has a custom Denny Hamlin mask. And hoo boy, it’s all kinds of terrifying.

“I mean, why wouldn’t you want this mug on the trophy again?” he joked.

So here’s the question: does he have a face mask with a Hamlin frown printed on it if he lost?

Check this thing out:

GAH! I can’t help but think about Hannibal Lecter when I see that.

Among the many disappointments of the suspension of current MLS season and the seasons of leagues throughout the world is that it is halting the progress of many young players making important steps in their development. In MLS, the 2019 season was one of the most promising in league history in terms of the success of young American players. It remains to be seen how 2020 will go, but there were promising signs from the first two weeks. 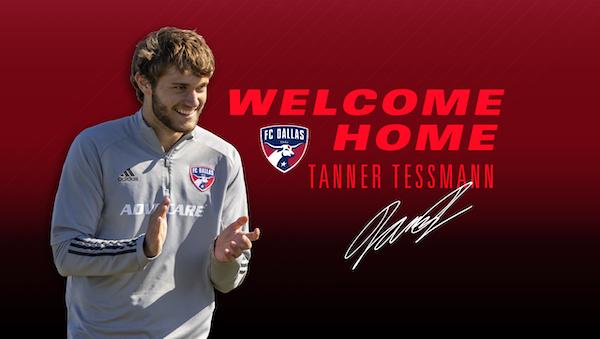 Tanner Tessmann, 18, was one of the players off to a strong start before the season was halted. The midfielder signed for FC Dallas just days before the team’s season opener. With injuries plaguing Dallas during the preseason, Tessmann got the start for the first game against a strong Philadelphia Union team. He ended up going the distance and assisted on Paxton Pomykal’s goal to close out a 2-0 win.

“There were lots of emotions but all good emotions,” Tessmann recalled. “Signing was a great experience. My family got to be there. I debuted and played the full game. We got the win. So, it was a perfect week. Those emotions were super high and I stayed level headed.”

Playing in his preferred No. 8, box-to-box central midfield role, Tessmann’s numbers against Philadelphia were very good both offensively and defensively over the full 90 minutes.

In the second game, Tessmann remained in the starting lineup and played 61 minutes in 2-2 tie with Montreal. While he played more of a defensive role in the midfield, his passing was still exceptional. He completed 95.6% of his passes including four of five accurate long balls.

“Honestly, I thought I would get more tired and I was going to have bad touches and get shut down quicker. But it was a really good game,” Tessmann said after the Philadelphia game. “It was a tough game to play in. I did feel like I belong. This was a huge achievement for me just to kind of know that I could play at that level. A month ago, I was playing with the U-19s in Mexico. To come and play with the MLS team, it was a real achievement. The ball moved a lot faster and the players were fast. But I felt like I belonged.”

Born and raised in Birmingham, Alabama area, Tessmann moved to Dallas to join the FC Dallas academy in 2016. He was in the club with midfielders such as Weston McKennie, Paxton Pomykal, Brandon Servania and Thomas Roberts – who all have extensive experience with either the U.S. national team of the youth national teams. Now he will hope to follow in their footsteps and be part of the team’s impressive developmental pipeline. 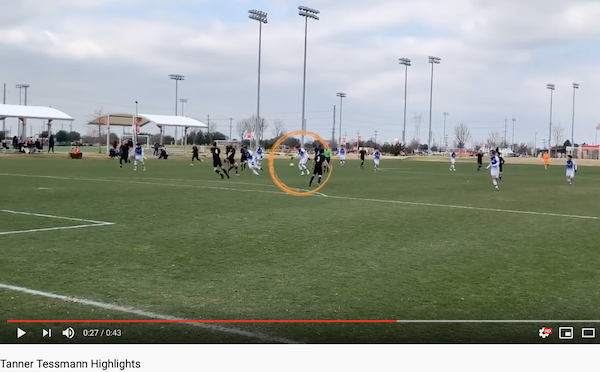 Last year, Tessmann began to show signs of breaking through. He won the Development Academy’s U-18/U19 Golden Ball for 2018-2019 season after leading FC Dallas to the U-18/U19 Academy championship. He also began playing for the club’s USL League One team, North Texas SC, which won the title with a win over Greenville in a final where Tessmann played the final 19 minutes plus stoppage time.

Following 2019, Tessmann emerged as one of the best 2001-born American prospects based domestically. He clearly had options as to where to begin his career but the pipeline that FC Dallas had built was too hard to pass up with a high likelihood of earning quality first-team minutes this season. It’s the first step of many which he hopes also includes winning silverware with Dallas and eventually being sold to the higher levels of Europe.

“We have a great pipeline of players that come through and then you see them on the national team, you see him going overseas like Weston McKennie,” Tessmann explained. “So, it really just helps all the players at FC Dallas that move here to really believe in themselves a little bit more and know those dreams that you have are right there in front of you for the taking. I just think that FC Dallas is the best place in America for sure to grow as a player and get opportunities that I don’t think a lot of other clubs can give you with Bayern Munich and the FC Dallas academy.”

“They want what’s best for the players,” he added about FC Dallas. “When you reach the pinnacle of MLS they want you to keep getting better. … They want you to reach your highest potential and overseas where you can do that. They aren’t scared to sell their players and see where that path can take them. They believe in their players that they can play at the next level. I love that about FC Dallas that they aren’t scared to take those risks and push their players beyond the FC Dallas first team.”

One of the more interesting and well publicized facts about the 6-foot-2 Tessmann is that he also had the option of heading to Clemson University to play both soccer and football. A gifted kicker even though he didn’t play high school football, Tessmann had a scholarship offer from Clemson’s powerhouse football team and was recruited by head coach “Dabo” Swinney, who is also a family friend of the Tessmanns. 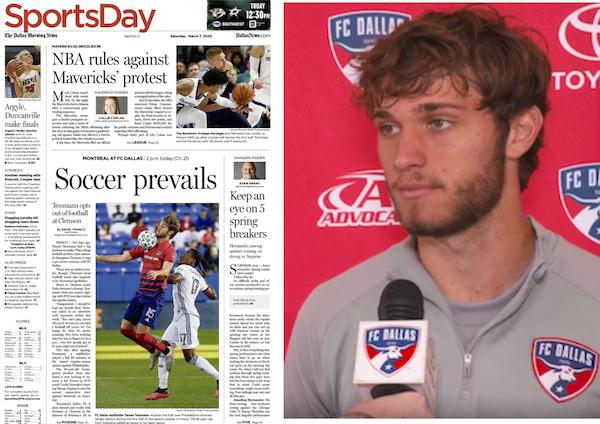 While it appeared as if he was going to head that route, he came to terms with Dallas and insisted that his priority has always been soccer. The opportunity to join FC Dallas was the quickest opportunity to put him on his desired career path.

“It would have been a great experience at Clemson to do that but I’ve been a soccer player since I was little, and that’s been my dream to play overseas in Europe and for the national team,” Tessmann said. “I’ve never had dreams to be a football star in the NFL as a kicker. I’ve been focusing on soccer, I continue to focus on soccer. … And I dedicate all my time to soccer — just becoming a student of the game and working hard every day to make my dreams come true.”

As for his other soccer dream, the national team, that remains very much alive at this point. He is eligible for the current U-20 team which, if everything returns to normal quickly, will attempt to qualify for the 2021 U-20 World Cup in Indonesia this June. He was part of the team’s first camp of the cycle last September under then coach Tab Ramos but was not part of the roster for new coach Anthony Hudson’s first camp in January. Tessmann says, however, that he has spoken with Hudson about being part of the team.

Competition will be tough to make the U-20 team and Tessmann is among several quality players in contention for the No. 8 and No. 6 defensive midfield roles for the team. The others being Colorado’s Cole Bassett, Internacional’s Johnny Cardoso, Bayern Munich U-23’s Taylor Booth. But with his size at 6′ 2″, his athleticism, and his skill on the ball, Tessmann could potentially offer something different to the group.

“With the U-20 World Cup, a bunch of players have blossomed there,” Tessmann said. “You saw Brandon Servania last year — he wasn’t really playing with FC Dallas, went to the U-20 World Cup, really did well with the team, and then came back and started pretty much every game. Same with Paxton Pomykal. And we have a great team. I really enjoyed being with those guys when I go to camp. And we love each other and we fight for each other even though we’re from different clubs and we get along really well. It would just be an honor to go and represent my country in a World Cup.”